can be found here
always good to check the bindubba PCBs thread at muffwiggler for updates, questions from other builders and probably some answers
Posted by nonlinearcircuits No comments: 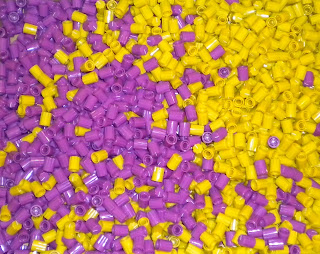 Sent off an order for a bunch of pcbs today. Heres the screenshot: 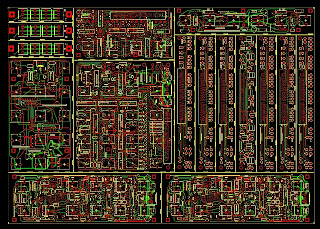 The Crossbreed started out life as a cross product generator from Electronotes using TTL chips, this version uses CMOS, which means less chips and less current draw. Anyway it can be fed two signals from VCOs, usually best if they are almost the same frequency, but not quite the same. The divisions and harmonics from these signals are then combined adjusted to obtain thicker (literally) waveshapes or carefully set up to create your own original animated waveforms. Animated because you can of course modulate the VCOs and obtain continuously changing waveshapes. Guess I should record some demos and post some oscilloscope shots for this to make sense......okay soon.

The name "Crossbreed" has two implications, one is the output is an audio waveform obtained from divisions and combinations of the input audio rate signals. The other is that this module can also function as a sequencer providing extremely complex and interesting patterns as a result of being fed two different clock signals.

The VCOs are functionally based on the Aries AR-338 PMS VCOs. The AR-338 was built around the SSM2030 VCO IC, which is now very rare. So I used the well-known Mikulic sawtooth core from Electronotes (used in many VCOs - CGS, MFOS, ASM) and dressed it up a bit to get the AR-338 functions.
So what does it do? It emits sawtooth, triangle, pulse, processed saw and pan-pulse outputs. The pan-pulse is cross of the pulse and triangle waves which can be modulated by CV, it actually looks like the signal from Ian Fritz's double pulse waveshaper, although the circuits are completely different.
The processed sawtooth can be adjusted to obtain a variety of waveshapes or CV can be used to morph it between different shapes.
Now the PMS bit, which means (in this case) "phase modulated sync". Usually VCOs can be sync'd together in different ways, soft sync and hard sync (google it). The PMS function allows the sync to be shifted to different parts of the syncing signal; the rising edge, falling edge or anywhere in between. Of course it can be CV'd to give... (well fk me@!) phase modulated sync!
Guess I will get some mp3s and 'scope shots up soon to make this clearer.

Panels for the sequencer boards are being manufactured this week and should be ready soon. They look much the same as the paper-faced proto-type a few posts down but are bare aluminium with baked on black labelling. The company manufacturing them also do panels that are used in many radio & TV studios around Australia, so I am expecting them to be excellent and durable.
Have also ordered 2000 knobs, Davies 1900H clones in yellow and purple
Posted by nonlinearcircuits No comments: